As you’ll discover while doing your research on this wonderful breed, Havanese come in a remarkably large variety of colors and coat patterns.

All our dogs are the ‘chocolate’ Havanese, meaning that they carry the chocolate gene, and all have chocolate pigmentation in their noses and lips, rather than the black pigmentation of other Havanese varieties.

Our two females also have completely chocolate coats with just a spot of white on their chest, while our male, although he has the chocolate pigmentation, has a glorious coat that is a blend of whites and champagne beiges, with a touch of silver and brown at the ear tips. 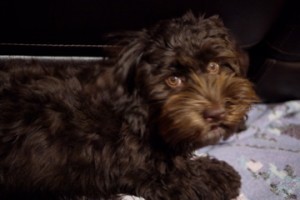 Hattie was born July 13, 2013. She is relatively large, for a Havanese female (about 15 pounds). She is a sturdy and intelligent dog with an engaging, enthusiastic, and happy personality. She has a solid chocolate coat with a single small wisp of white on her chin and a patch of white on her chest. Her coat has a silvery overtone sheen on its hair tips. When she is trimmed, and the silvery sheen is cut off, her coat is dark brown, but the silvery sheen returns within a fairly short time.  Hattie is a vocal gal, and ‘talks’ to us with an amazing variety of different vocalizations. Like all our dogs, she is very playful and athletic. She is loving and affectionate, and devotedly attached to her owners, but is also very open and accepting of strangers. 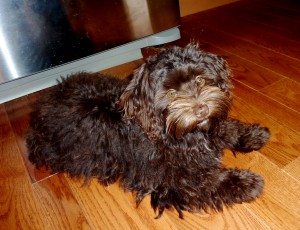 Zena is Hattie’s sister and littermate also born on July 13, 2013. We bought them both at the same time from an experienced and well-known breeder in Maine.  Zena also has a solid chocolate coat, with the same bare wisp of white on her chin and chest, but she does not have the silvery overtone on her coat like her sister. She is smaller than Hattie, about 11 pounds, but she is far from delicate.  She is the fastest runner of our three, and loves to tumble and roll, out of a full speed run. She pops up out of her roll and zips off again in a new direction at full speed. (It is truly a pure joy to watch these Havanese dogs enjoy their own exuberance).  She has a remarkable facial expression that people find very endearing. One of our granddaughters, (4 year old Evie), said, “I really like Zena because she has such kind eyes”.

Hattie and Zena, as sisters and littermates, share the same championship bloodlines in their AKC pedigrees. 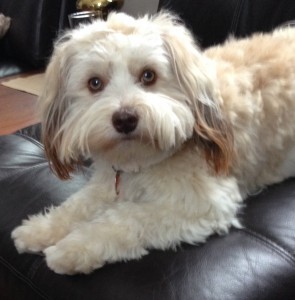 Buster was born February 27, 2014. He is both a real ‘pretty boy’, a spectacularly beautiful specimen of the Havanese breed, and also a rollicking ‘tough guy’.  He is a strong and sturdy dog of a good size for a male Havanese, like Hattie, about 14 pounds.  He has the typical happy and eternally optimistic Havanese personality, and he has grown confidently into his role as ‘lover boy’.  He is as athletic as his mates, and like them he loves to run and tumble as he explores his domain.  He has a truly spectacular coat that is a blend of white and champagne beiges, with some silver overtones on the ear tips. Buster started out as a darker sable parti color. However, as is typical in some sable Havanese lines, his color lightened up in his first year and remains the color you see in the photo at the right.  We got Buster from an experienced and well-known breeder in western Pennsylvania.

Our dogs’ bloodlines typically produce litters that show the full range of Havenese color varieties. Hattie and Zena’s parents both carry the chocolate gene, but their litter mates ranged from black and white, brown and white parti coats, to sable, as well as solid chocolate coats and pigmentation. Buster’s parents alos carried the chocolate gene and his litter mates showed a similar variety of colors.